The Group has successfully campaigned for a Creekside path along the waterfront of the Faversham Reach and Waterside Close housing developments, which should eventually form a crucial part of the English coastal path through Faversham. 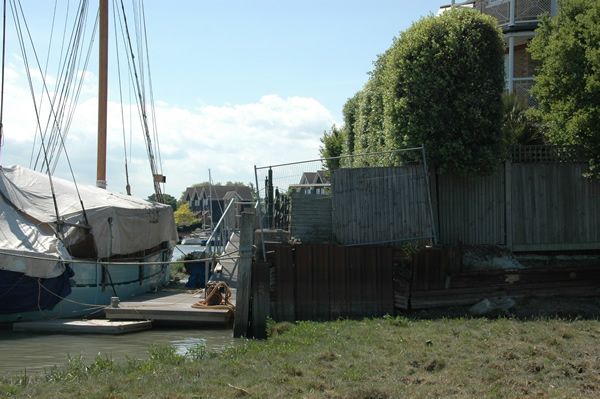 There is a complicated history to the recent attempts to secure a Creekside path at Faversham Reach and Waterside Close. Briefly, public footpath ZF5 ran through Faversham Reach but was obstructed, first, by the building of the estate and, second, by the construction of iron railings to stop access in front of numbers 13-15 Faversham Reach (the three houses nearest to Crab Island). The footpath ran under those three houses, along the promenade and then ‘clipped’ two more properties before exiting by the main entrance to the estate.

At present those wishing to follow Faversham Creek out to the Shipwright’s Arms and round to Oare have to take a substantial, and partly unsightly, diversion round the back of the Faversham Reach development and the Brents Industrial Estate before re-joining the Creek at the marsh end of the Waterside Close development.

Faversham Town Council, with the support of the Faversham Society, the Faversham Municipal Charities, Bensted’s Charity and the Faversham Creek Consortium, sought to overcome the obstruction by proposing in 2012 a diversion which would have seen a ramp constructed behind numbers 13-15 Faversham Reach and then a slight re-routeing inside the estate. The Faversham Reach Residents’ Association tabled a counter-proposal to extinguish this obstructed footpath and to create the existing route round the back of the estate as a public footpath. 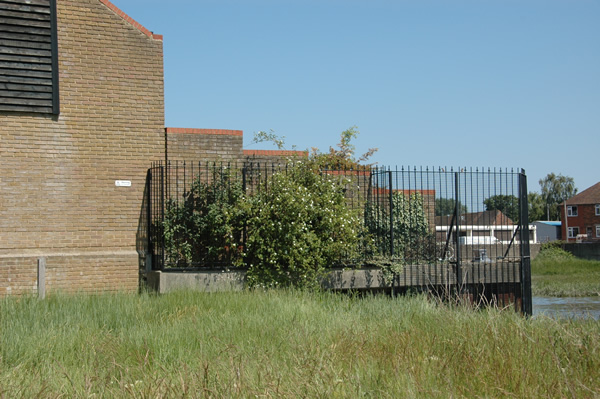 The Town Council’s proposed diversion order was supported by KCC’s officials but was surprisingly rejected by three votes to two by KCC’s Regulation Panel (a panel of five councillors from outside Faversham) in November 2012. Orders to abolish the footpath were made in accordance with the Panel’s decision but Faversham Town Council and other bodies and individuals objected to the Orders and a public inquiry was held in May 2014 to determine the issue.

The independent planning inspector’s report ruled that that the path round the back of Faversham Reach (ZF 42) was already a public footpath and could not therefore be created as such. (An order was subsequently made adding the path to the Definitive Footpath Map.)  She also rejected the proposed abolition of the obstructed footpath within Faversham Reach, saying that if the obstruction could be overcome ‘it would be likely to be used extensively’. She also concluded that ‘there appears to be no reason why it would not be feasible to divert the route from beneath the houses’.

KCC issued an informal consultation document on 2 June 2015 in which they proposed that the obstructed footpath should be diverted to run along the Creekside of the Faversham Reach estate and then proceed round and along the front of the Waterside Close estate, with ramps constructed at the Crab Island and marsh ends to provide access and some work at the slipway between the two estates to connect the existing paths. There was a s.106 agreement at the time the Waterside Close development was built providing for such a footpath there but, for various reasons, it has not been possible to implement it to date. However, planning permission was given for a ramp at the marsh end of the development. The Group’s response to the consultation document can be seen here.

A KCC panel subsequently met on 22 February 2016 and unanimously approved  officials’ proposal to divert footpath ZF5/create a footpath along the front of the Faversham Reach and Waterside Close estates subject to assurance that the necessary funds (put at £92k or less) were available.  The paper prepared for the panel is Regulation Committee Member Panel-22022016-1500-Agenda-PublicDocPack (2).  The FFG’s statement to the Panel is FFG – letter to KCC Panel – February 2016. The minutes of the Panel meeting are here: Footpath ZF5 – report of KCC panel meeting on 22.02.16

On 13 June 2016 KCC issued for formal consultation the Orders to give effect to the Panel’s decision: ZF5 and ZF43 Notices, Orders and Statement to accompany  A copy of the Group’s representations is here: FFG – response to formal consultation July 2016

The Inspector’s decision was received on 23 February 2018.  He approved the Orders. Here is the Decision Letter: Public Inquiry 2018 – Decision Letter  It will take some considerable time to open the path since further detailed planning work is needed for the works required, negotiations carried out with residents over possible compensation and mitigation measures, consents will need to be obtained, tenders sought and the work carried out.  A press release issued by the Group is here: FFG – public inquiry 2018 – press release re decision

In May 2019 KCC wrote to the various parties involved to seek information relating to the application made by the Faversham Reach Residents’ Association (FRRA), submitted before the last public inquiry, to extinguish the original obstructed footpath on the basis that it had been incorrectly added to the Definitive Map.  The Group responded, pointing out that evidence given at the inquiry demonstrated clearly that the path was correctly placed on the Definitive Map.  A copy of the Group’s response is here: FFG – FRRA DMMO application – response to KCC . KCC issued a notice on 7 November 2019 (see KCC – letter of 07.11.19 re DMMO decision ) saying that, following a detailed investigation (see KCC – report of DMMO investigation ), it did not consider that the evidence pointed to an error having been made.  The FRRA appealed to the Planning Inspectorate against KCC’s decision: a copy of their grounds is here:FRRA DMMO application – Grounds of Appeal_Redacted[3]  The Group submitted observations to the Planning Inspectorate: FFG – FRRA DMMO – comments on appeal[1]

The FRRA submitted some further comments but the Group did not think it necessary to respond to them. The papers were referred to an Inspector in late March 2020 to make a decision on the appeal.